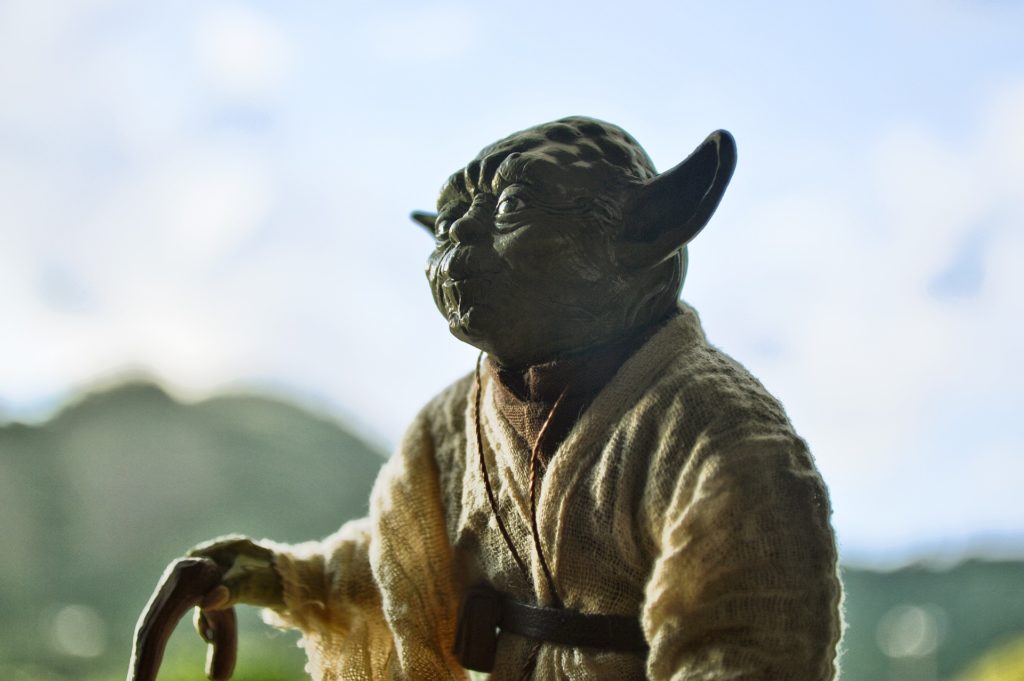 ’Tis the season when the force awakens fans of the Star Wars franchise around the galaxy far, far away. With “Star Wars: The Rise of Skywalker”, the last in the current trilogy coming out this month, let’s take a look at the various Intellectual Properties (IP) under Lucasfilm (now acquired by Disney), a film and television production company founded by George Lucas in 1971. Known for being litigious in the protection of its IP, we may run into a few cases where companies that used terms and aspects derived from the Star Wars franchise faced the wrath of the Death Star in trademark and copyright infringement lawsuits.

As Master Yoda might say, “Begin, we must”, and without further ado, it’s time to fire up the Millennium Falcon and travel into hyperspace to explore the various IP assets that are owned by Lucasfilm or under the Star Wars franchise in general.

Trademarks will be with you. Always.

A trademark, with the exception of unconventional marks, is mainly represented by a word or words, slogans, symbols, images or logos, which is capable of identifying and distinguishing products or services in a related business field. As brands are used to market products or services in a business, a registered trademark serves to protect the brand itself in the form of a legal asset to prevent misuse by another party that is not the owner of the registered trademark themselves.

In light of this, Lucasfilm is notorious for filing trademarks for everything that is created under the Star Wars name. Whether you are an enthusiast or just a passer-by of the franchise, it is commonly known that there are numerous names in the Star Wars franchise referring to characters, planets, space tech devices, and vehicles in flight or land that have been registered as a trademark by Lucasfilm.

Character names such as Princess Leia Organa, Luke Skywalker, Yoda, Darth Vader, Obi Wan Kenobi, C-3PO, R2-D2 and many more are registered as trademarks under various classes in various countries. The trademark list stretches further as terms referring to a species such as “Wookiee”, “Ewok” and “Gungan”, to name a few, were also registered by Lucasfilm. Phrases such as “May the Force be with you” or even “May the 4th be with you”/”May the Fourth be with you” (a phrase indicating Star Wars Day) which are usually used to promote the franchise have also been registered by Lucasfilm. Furthermore, generic terms such as “Bounty Hunter” which classify fan favourites such as Boba Fett and Jango Fett (both character names also registered) were surprisingly successfully registered as well. Generic and common terms are generally not advisable to be registered as a trademark due to the commonality of the term, and it may dilute the brand name itself in its business sense for being generic and common.

The registration of these names in the Star Wars universe as trademarks is in relation to the bountiful (no pun intended) merchandise being sold, such as toys, video games, comic books, clothing and recently furniture. Yes, FURNITURE! Fans can now sit on a TIE Fighter shaped chair or the more sinister Emperor Palpatine and Darth Vader armchair. Jedi lamps are also available. This goes to show that one can deck out an entire room or house with Star Wars merchandise, decoration and now furniture. It also shows how embedded the Star Wars brand is in cultural phenomenon to the extent of being a religious allegory.

Speaking of cultural phenomenon, in the case of Lucasfilm Ltd. LLC and Lucasfilm Entertainment Company Ltd. LLC v. Michael Brown, a Lightsaber Academy set up in America to teach the way of the Jedi, and also how to wield a lightsaber, was sued by Lucasfilm in 2016 for trademark infringement, false designation of origin, federal trademark dilution, cybersquatting and many other claims under Californian state laws. The defendant in the case was claimed to have infringed a number of trademarks owned by Lucasfilm such as the term “JEDI”, “LIGHTSABER” and the logo that was created by the defendant for the academy was closely similar to the Jedi Order logo that was presented in the franchise.

Even the usage of the word “JEDI” in referring to mind bending individuals may attract a lawsuit from Lucasfilm, even if the usage is not for commercial gain where profit is made and permission would be required from Lucasfilm themselves. We can see this in the 1985 case “Lucasfilm Ltd. v. High Frontier” where Lucasfilm had filed a lawsuit during Ronald Reagan’s presidency in the United States in relation to the use of the term “Star Wars”. President Ronald Reagan had worked with the US military to launch a program aimed to fund and research laser missiles and battle stations in space. Interestingly, the public and media had applied the term “Star Wars” as a moniker associated with the program, which sparked Lucasfilm to launch a lawsuit. Although using the term “Star Wars” would cause a huge uproar to any trademark or brand owner of the term as it represents the entire image and reputation of the franchise, one must take their hat off to Lucasfilm and the extent they would go in protecting their IP rights.

Usage of such terms as “DROID” have famously been met with lawsuits by Lucasfilm against the company Verizon Wireless. As a telecommunications company that offers wireless products and other services, Verizon Wireless sought to launch a line of Android mobile phones with the name “DROID”. As Lucasfilm had registered the trademark “DROID” in 2008, they were not too pleased with the usage of the word. Be that as it may, a deal was made between the parties involved where Verizon Wireless would have to pay a licensing fee to Lucasfilm to use their registered mark “DROID” for advertising purposes.

Nevertheless, most cases brought on by Lucasfilm have been resolved amicably between the parties, which is infinitely more preferable than being thrown into the gaping mouth of the Sarlacc pit monster on the desert planet Tatooine.

Patents: Do, or do not. There is no try.

Quite a number of patents have been filed as well in regard to the Star Wars franchise. In brief, a patent registration provides a legal right of ownership to an applicant for an invention that is novel and eligible for industrial application. It may seem far-fetched for a movie franchise to create a number of inventions and have them registered as patents when most of the on-screen displays of technology may be deemed to be fiction or not possible, as our reality and current advancements in technology have not reached the level or vastness that was shown in the Star Wars franchise. Although of course, looking at how the Star Wars franchise is based on science fiction technology, it may not come too much as a surprise.

The recent appearance of the adorable droid character “BB-8” in “Star Wars: The Force Awakens” was wildly inventive due to the mechanisms involved. With a body shaped like a ball, and a domed shaped head similar to that of R2-D2, the mechanism which allows “BB-8” to be mobile would be complex. This led to robotics and toy company Sphero, Inc. (that had a licensing deal with Disney, which acquired Lucasfilm in 2012) making a “BB-8” toy that could be enjoyed by the masses. Patents for a “Self-Propelled Device with Magnetic Coupling” (US 9,342,073 B2), “Magnetically Coupled Accessory for a Self-Propelled Device” (US Patent Application No. 20140345957 A1) and more relating to the movements and mechanisms of BB-8 were filed by Sphero.

Other related Star Wars patents such as the “Audience Interaction Projection System” that was filed by Disney (US 9,843,744 B2) which projects a virtual lightsaber that allows patrons of the Disney Star Wars theme park to engage in a virtual battle against drones and to deflect incoming beams by using their own lightsaber.

I sense great Industrial Designs & Copyrights in you, Skywalker

With something as revolutionary as the Star Wars franchise, the relentless demand of fans for more sparked the creation of extensive designs and copyrighted materials throughout the years such as the novelisation of the franchise and toys/model designs ranging from the iconic TIE Fighter to Han Solo being frozen in carbonite. In each of these cases, one can be assured that the necessary IP rights have been protected.

As such, any toy company seeking to produce action figures of the characters in the franchise, or any book or comic book publisher seeking to use copyrighted materials based on the franchise must obtain licenses and permission from Lucasfilm, or now Disney, in order to avoid IP infringement issues. With industrial design or a design patent, once registered, protection would be granted on the distinct appearance/surface features of the product, which includes ornamentations, patterns, shape that serves as something novel that has never been created before. Whereas for copyright protection, an exclusive right is given to the creator/author of the creative work, which may be manifested in a literary, dramatic, artistic or musical form.

An interesting case which blurs the lines between industrial design and copyright protection was brought forth in “Lucasfilm Ltd v Ainsworth”, a dispute concerning the instantly recognisable Stormtrooper helmet. Andrew Ainsworth, a prop maker, was hired to produce 50 Stormtrooper helmets for the first Star Wars movie, “Star Wars: Episode IV – A New Hope” in the 1970s. Years later, Ainsworth was reproducing Stormtrooper helmets replicas to be sold to potential buyers which caught the attention of Lucasfilm, and a copyright infringement claim was raised.

During the case, the focus switched between infringement of design rights and copyright as there was an issue in determining whether the helmets were considered as merely a prop that is industrially applicable, or a sculpture and hence a work of art that will fall under copyright law. If the former was adhered to, then a design right protection would be retained only for 10 or 15 years. Once the protection period has ended, Ainsworth would be allowed to reproduce the helmets and sell them at his own free will. But a copyright protection would grant a protection for 70 years instead. Be that as it may, the case was ruled in favour of Ainsworth. Although Lucasfilm had lost the battle in this case, the Star Wars franchise nevertheless still preserved itself as a multi-billion dollar empire and sits comfortably in the top five highest grossing media franchises.

Never turn to the dark side

All said and done, one should be wary of any plans to set foot in the Star Wars galaxy when marketing their goods or services. A lot can be learned from how the Star Wars franchise has maintain its value through the protection of its IP rights, and this is consistent today as it has been since the first movie came out, sparking a global phenomenon. As Yoda said, “Much to learn you still have my old padawan. This is just the beginning”.