This Lunar New Year welcomes the year of the Ox.

Every year this time (barring COVID-19 restrictions), there will be lively celebrations, the giving of red packets and gift, and the visiting of family and friends amongst Chinese communities around the world. This year, we can expect to see many variations of the ox, bull, cow or even buffalo used interchangeably on red packet designs.

However, this also means that we may see familiar bovine characters or trademarks make an appearance on Lunar New Year paraphernalia, as opportunistic copycats and infringers may take advantage of this situation to rake in some moolah (pun intended).

Of course, this does not mean that these characters and trademarks are only at risk during this time. There is always the possibility of misrepresentation being committed by irresponsible parties regardless of the time of the year. Let’s take a look at a few scenarios!

The case of Red Bull GmbH v Big Horn UK Limited & Ors [2020] EWHC 124 (Ch) provides a narrative on what rights holders can do to challenge lookalikes. Red Bull is and has been the proprietor of various distinctive trademarks used on energy drinks and non-alcoholic beverages. Red Bull alleged that Big Horn had infringed their trademarks by using similar elements on their marks for bottled water and energy drinks marketed in the UK and the EU, which could potentially cause the average consumer to associate the marks and products with those of Red Bull. 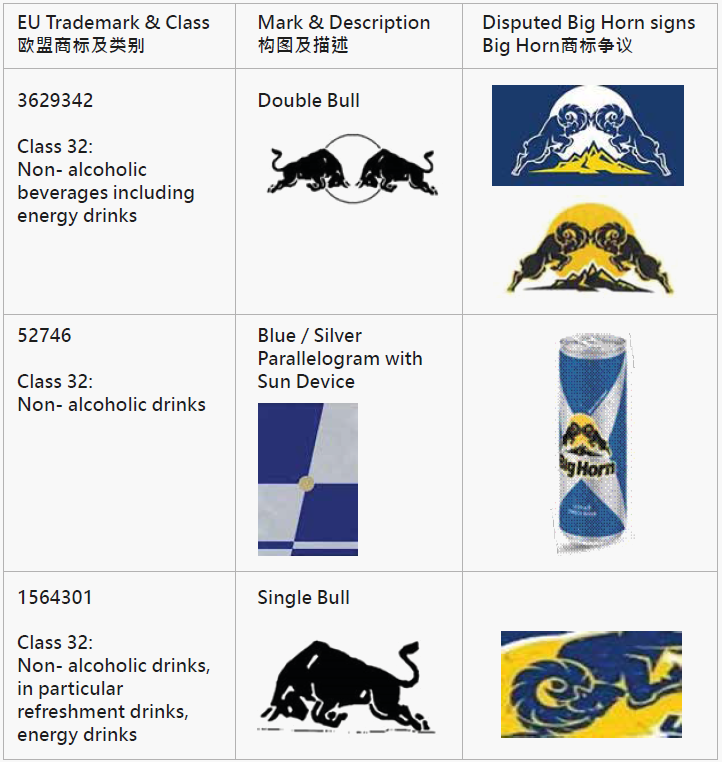 The Court was subsequently of the same view after considering the evidence brought before them and accepted that the marks were conceptually and visually similar, which in turn took unfair advantage of Red Bull’s reputation.

Over in New Zealand, another case involving Red Bull would be the case of Red Bull New Zealand Ltd v Drink Red Ltd [2016] NZCA 373, where these two corporations entered into a trademark infringement dispute. Red Bull was of the opinion that Drink Red – a producer of energy drinks and Ready-to-Drink (RTD) beverages – had the intention to “piggy back” on its trademarks and reputation with their “ЯED” and “ЯED Energy” marks. An interim injunction was applied by Red Bull to remove both of Drink Red’s products from the market.

The High Court judgment was in favour of Drink Red, relying on a report that associated the coining of the “ЯED” mark with Russia due to the vodka in its RTD. However, Drink Red’s victory was short-lived as the decision went on to the Court of Appeal. The appellate court subsequently overturned the High Court decision, as they found that Drink Red had intentionally misled the High Court judge by altering the report to remove all references indicating that a similarity to Red Bull’s trademarks was deliberate.

Lamborghini is well known in the luxury sports car market. Lamborghini has several trademarks but is arguably most famous for the black and gold shield-shaped trademark with an image of a golden bull within and the word Lamborghini at the top. Dal Toro, a company dealing in restaurants and classic and luxury car restaurants began using a similar logo on clothing and accessories that it was selling.

Lamborghini naturally filed a lawsuit against Dal Toro as their logo significantly resembled its trademark. In the beginning, Dal Toro denied the charges but both corporations eventually reached a settlement. One of the terms in the settlement was that Dal Toro refrain from using Lamborghini’s trademarked materials or any confusingly similar marks. Thus, this settlement can be seen as a form of surrender by one of the “bulls”.

This battle of buffalo heads between Carabao Energy Drink and Vietnamese fertilizer company Binh Dien took place in Thailand. Carabao had opposed three of Binh Dien’s “Buffalo Head and device” marks at the publication stage, claiming that it was confusingly similar to their well-known trademark.

Binh Dien defended their marks, claiming that their buffalo head mark had been used in Vietnam and other countries since 2002, while the Carabao trademark only became famous in Thailand much later. They managed to convince the Thai Department of Intellectual Property (DIP) that their applications were distinct enough so as to not confuse the public as to the source of the goods and services. The DIP subsequently rejected Carabao’s objections and granted registration of Binh Dien’s marks in Thailand.

Thus, to prevent trademark infringement, one should always be vigilant and take necessary precautions to protect their trademarks. Getting advice from trademark experts will provide security in terms of one’s rights and peace of mind for rights holders.

Since the Ox symbolizes power, diligence and tenacity, trademark owners should also follow this example in having the strength, courage and perseverance to protect their rights and mark their territory, as one never knows when predators will come hunting for opportunities.

Wishing you a healthy, prosperous and successful Year of the Ox!